Some time ago I posted a review here, of some of the fine building kits I had purchased from Charlie Foxtrot Models.  For those of you unfamiliar with Charlie Foxtrot, they are a British company that produces several ranges of some very nice MDF kits.  Shortly after posting it, imagine my surprise to receive an email from Colin, owner of the company.

He asked me what games and genres I played, and if I had any ideas for further ranged or buildings he could provide.  I think that is some pretty impressive customer service, to reach out in such fashion to known loyal customers.

The truth is however, I didn’t know how I could help him.  The only thing that seemed obvious to me was American Colonial.  My job gives me a certain advantage there.  Charlie Foxtrot, however, is a British company as I mentioned.  I didn’t think there would be much interest in the American War for Independence over there. As to American interest, well there is certainly some here, but MDF can be pricey to ship.  I was afraid to suggest that Colin invest in hopes of American customers.  I have no idea how many of us purchase from him.  (I still don’t by the bye).  There, I let the matter drop.

Several months later came the new edition of Sharp Practice from Too Fat Lardies.  Like many others, I was swept up into the excitement.  Sharp Practice 2 makes it very clear that it is not intended just for the Napoleonic period, but rather for the Age of Muskets in general. I found myself drawn to the American revolution, a period I have most avoided as a gamer.  I also noticed a surprising interest in the period of the Too Fat Lardies list.  Maybe interest was greater in Britain than I thought.

I also noticed a dearth of good buildings for the period.  There are a handful of Very nice (and pricey) Grand Manner buildings, but most offerings far too modern, more suited to the American Civil War, or they are log cabins!  I know you Brits think we were completely rustic, but by the time of the war, most of the seaboard was pretty settled.  Log cabins are great for Guildford Courthouse or Kings Mountain, not so great for Yorktown or Boston. Maybe the interest would be there.

Enough of all that.  This is supposed to be a review of the first of Charlie Foxtrot’s New World range, not me bragging about my involvement which was really very minute.  All I did was send photos of buildings I thought would be good choices.  Two of those were the Richard Charleton House and the Grissel Hay house.

Both of these are original 18th-century houses still sitting on their original foundations and footprints.  Colin took these to inspire his “Tidewater Home”.

One of the first things you notice about this kit is it is large.  Far more pieces than most CFM I have (Only my Georgian House is larger).  Lots and lots of pieces.  Many of these are designed to combat the biggest failing of MDF which is it’s inherent flatness.  Colin has used many clever tricks to bring out the 3-dimensional nature of the prototype.  the columns and the portico, the window sills, and may favorite, the dentil work under the eave and the pediment.  This might very well have been neglected by a different manufacturer.

Of course, the footprint of the building is impressive as well.  Colin told me he saw the house as a focal point of a table and it certainly could be on the 6X4 I am used to.

The house is 25 x 14cms or almost 10 x 6 inches and stands about 6 1/2 inches tall to the peak of the roof.  As is typical of any CFM structure, the building comes apart into its separate floors so figures can be placed inside.

Construction of the kit is easy, with only a few parts being fiddly.  Even the porch steps went together easily which hasn’t been my experience with most mdf kits!  The parts that appeared fiddly were the little pieces to build the tops and bottoms of the inner columns.  The instructions even mentioned to be careful cutting them out and my kit had extras.  Actually however they came out rather easy.

The porch takes a bit of fiddling to get it all right, in fact, I see in this picture that the top of one of the columns needs work.  Care needs to be taken to keep those little squares, well squared, and to keep the columns at the right height (they can sink into the porch foundation).  The shutters are all separate pieces so they can be attached open or closed or perhaps in poor repair, and one set of the doors is seperated so they can be modeled ajar. 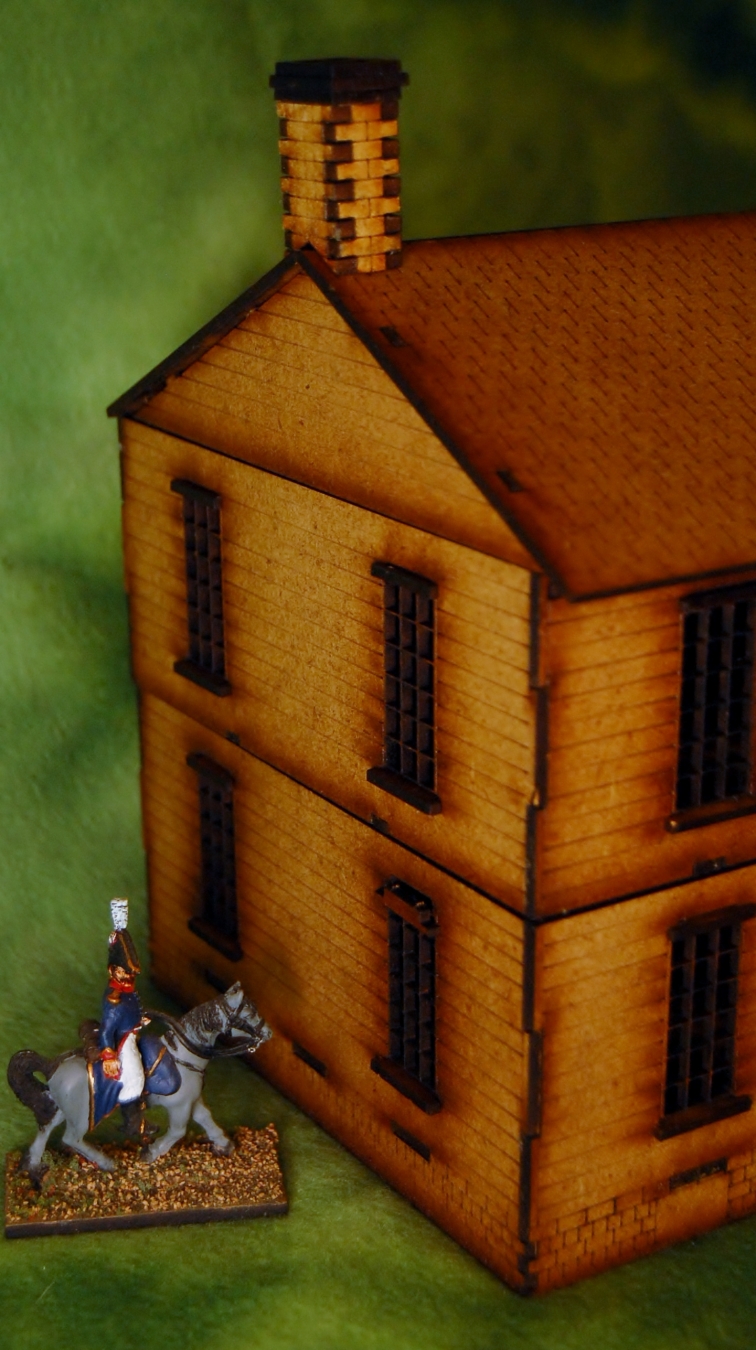 This is a very useful kit.  While the prototype buildings are urban, there is nothing to distinguish it from several country houses all through the Colonial American South, or for that matter even into the mid-Atlantic.  Suitable for more developed areas in the FIW and obviously for the AWI, but also the ACW. These two witnessed both the Revolution and the Civil War. (or I suppose anything more modern in the Eastern United States as well).  It is probably also worth mentioning that the Hay house served for a time as a boarding house and the Charleton as a Tavern, so they can serve as more commercial establishments as well.  The second in the line which has already been released is a kitchen, and several other out buildings are planned which can really bring this house to life and turn it into a believable home.  A beautiful model, I am sure I will by another one or two to add to my village.

I also feel I should mention, even more so since I referenced the high price of shipping in the beginning of this article, that Charlie Foxtrot now offers service with a new courier.  This courier works with the United Postal Service for a delivery that is easy, convenient, and less expensive that it can be.  Good show!

Now to finish painting the house and shutters!