So a project that I have been working on for some time now has been a War of the Roses game using Sharp Practice.  The original idea for this comes from Pat’s blog Wargaming With Silver Whistle. The Idea was later added to the Too Fat Lardies’ Summer Special 2013. This excellent article with it’s inspiring photographs and the availability of The Perry Brother’s figures certainly called out to me, and I started to build for it.

So I began to buy figures and build, soon I learned that my local wargame show Guns of August,  intended to have a medieval theme.  The die was cast.  Only one problem, Sharp Practice 2 was released…

Obviously, I could have left matters alone and used the old rules, but I decided to revise the old Of All Base Passions  to version 2.  this I have done with no permissions requested or granted so apologies to all concerned parties.

In a similarly unoriginal fashion, the scenario I ran was also from the Silver Whistle blog.  This is a pretty simple scenario.  Completely equal forces approaching an uncontrolled town and the opposing Lords territories.

From the start, luck smiled upon the Yorkists.  Both the command cards and the dice luck seemed to smile upon them.  Actually so did the terrain.  There was a walled field that should have been placed a few inches further to the west.  Its location ended up giving the Yorkist forces a real advantage,

I should have placed this field with its center equal to the Town’s main entrance.  Doing so would have been fairer.  This error allowed the Yorkist to take the wall and in the following archery duel, they would not have had such an advantage over their enemy.  The Archers in formation began a long range duel with one another, but with the Yorkists in cover and the Lancastrians exposed the former were slowly getting the worst of it.

Oddly, neither Lord realized at first that the walled town had gates on the sides.  Upon this epiphany both sent forces towards those weaker entrances.  The bad luck with command cards, and with their dice for movement prevented the Lancastrians from reaching theirs.

Not so the Yorkists.  After just a few turns they broke through the wall and quickly dealt with the weak defense of the townspeople.  Gisborne, the Town’s mayor was still getting his forces together.

The Lancaster Archers realize the weak position but also notice that the enemy’s Men of Arms have been approaching the Town’s front gate and are well in short range.  This proves wise, and while little blood is spilled the foot knights find themselves becoming a little shaken.

Seeing that the Yorkist knights are close to having excessive shock, the Tudor commander ordered his billmen to close with them.  While the idea had merit, it failed to recognize the differing quality of the troops involved as well as the armor advantage of the knights.  As would be expected by their Noble Liege, the men at arms suffered very little from the scrape. They were forced to withdraw having received some small addition to their shock, but they lost only one man to the Lancastrian loss of 5.  Not only were the forced back by losing the fight by four, but they were now broken as well.  they routed back from whence they came with a tremendous amount of excessive shock.  The problem is this took them right through a group of their archers with enough excessive shock that they two now were broken.  The Lancastrian luck continued to plummet when an enemy arrow pierced the armor or the Lancastrian’s second in command.  He fell dead.  In a frighteningly quick fashion, the Lancastrian force morale total went from 10 to 3.  Lord Oxford was forced to order his men to pull back fearful that otherwise, they would simply rout.  The only good luck he had was when a random event (and perhaps the Yorkist soldiers breaking through the gates) caused Master Gisborne to place himself and the townspeople under the protection of the Lancastrians. 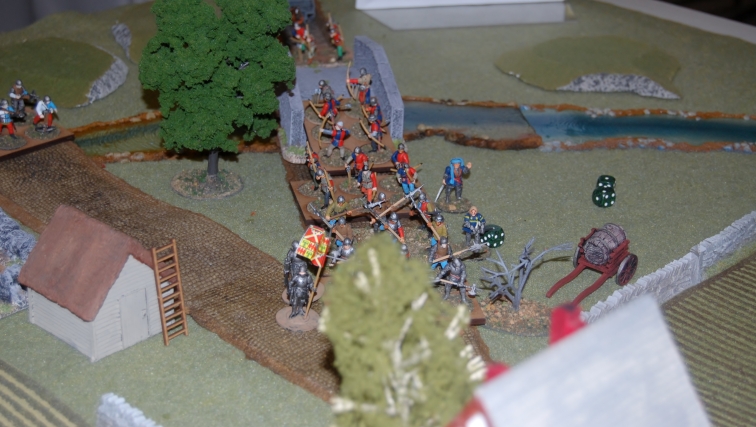 So, in the end, I had decided to not make use of deployment points but rather to follow the original idea of marching forces into the game.  Partly I reached this decision due to the scenario predating the new rules and partly because I don’t imagine this period to be one of great stealth.  This was an error, however.  Far too long was spent getting the troops into action.  In fact, oddly the fight went march,  march,  march, shoot a little, charge and then suddenly it was over.  I am also not convinced that there may not be a better way to do armor.  Presently it is a saving throw, but as all hits already have a saving throw for cover it seems redundant and the game starts to feel a little like a Warhammer.  More thought may be necessary there.