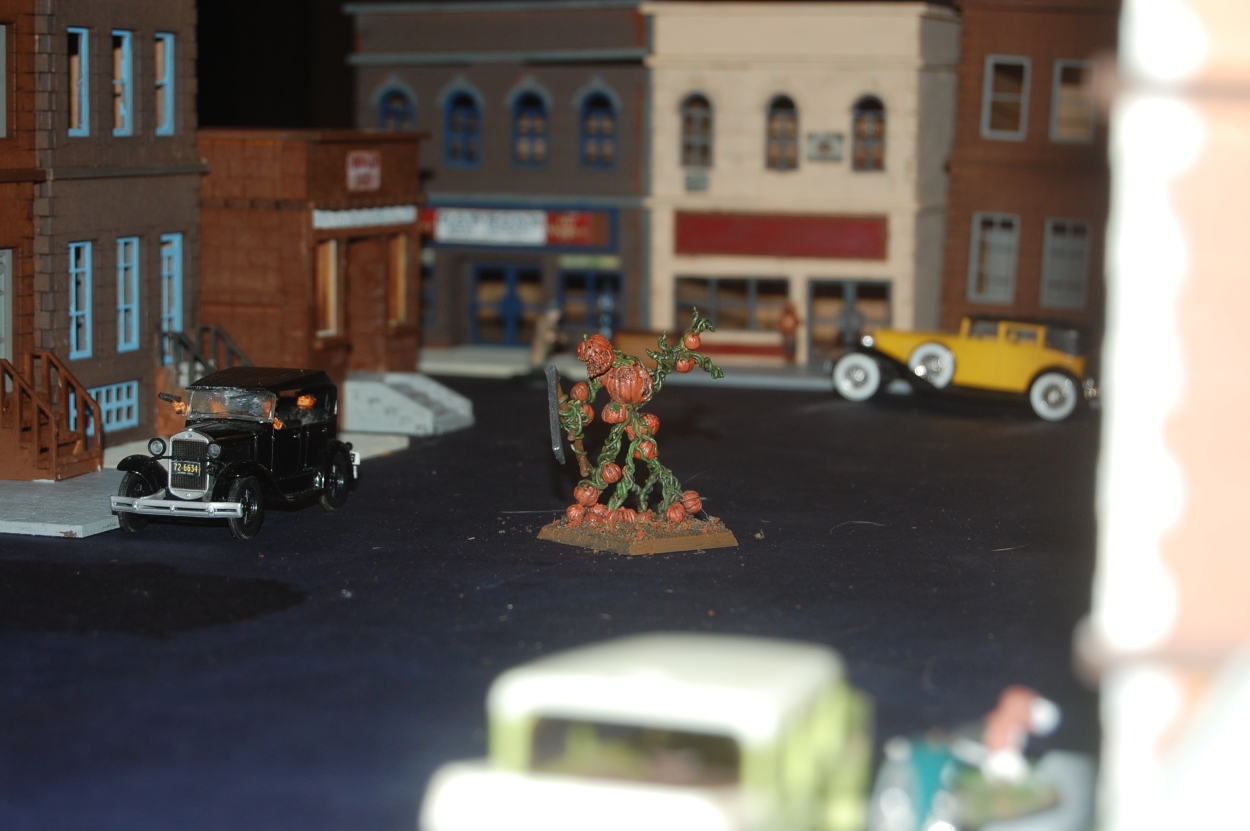 Yesterday was day two of new local Wargaming convention, Call To Arms, here in Williamsburg.  It being October, I thought it might be fun to play a Pulp Alley game in honor of Halloween.

On the Pulp Alley YouTube page, I found the perfect idea.   Already a variation of their printed scenario Into Darkness from their Lost Worlds of Lemuria campaign.   This is a great example of how open this game is. The original is designed to be in a lost world and probably in jungle terrain with the random bad guys being robots and the plot points are just common plot points.   In the video, Dave places it in “King City” a Gangster film noirish environment in the late 20’s or early ’30s.  He replaced the plot points with horrific pumpkins, with Pumpkin Jack as the major plot point.  He replaced the robots with zombies.

I kept some of these features myself, but I had a backup plan if I didn’t get my terrain finished.  This could easily have been in a forest, desert, cowboy town or Mexican village all of which I had terrain fo already.  You could set in on an alien planet or an old medieval village just as easily.  Frankly, it was a good excuse to finish painting my Mad Dogs with Guns terrain.

I also replaced the zombies.  I created a system to randomly generate pumpkin Cultists or Pumpkin Monsters.  Had I more time I would have actually created a mixture of standard Halloween ghouls.  You know, ghosts, vampires, werewolves and yes zombies.

I provided four pre-generated leagues for my players, but in the end only three participated.  This was wealth little Johhny Silver with his Sister and loyal servants, District Attorney Denton and his girl Missy from the Herald defended by a handful of brave police officers and Lastly Gangster Corky Gallagher with his mob, right out of the Vice City campaign book.

According to ancient legend,  Indian prophecy predicts that when the stars are right, Pumpkin Jack will return to terrorize the living.  Young Johnny Silver knows these legends and decides he must stop the creature.  Unbeknownst to him, however, local petty mobster Corky Gallagher overhears the boy talking and decides to try to manipulate the monster for his own gain.

The leagues spend most of the first turn creeping up the streets and suffering a number of failures due to the creepy nature of the horrific pumpkins.  The silence is broken however when inexperienced Officer Macoy challenges the gangsters.  He is rewarded with hot lead and falls to the ground.

Soon the Police and Mobsters find themselves in a fierce firefight in the middle of the city.  A well-placed Tommy gun burst from Myrna, Cork’s cold-hearted Moll knocks many of the police to the ground.

Meanwhile, Johnny Silver’s foolish little Sister is running around with Patches discovering the Pumpkins which oddly have little effect on her. Still, ever vigilant Nanny watches over her, just in case!

Sis might have had little trouble with pumpkins, but the same was not true for poor little Patches.  Not only did he take the first Pumpkin plot point, but he also finished off a large number of Pumpkin Aberrations, but eventually too much squash in his little hound belly was more than even this brave dog could take.

After a while, all of the action gathered around Pumpkin Jack in the middle of the street.  The Gangsters and the Police had spent most of the night fighting while Johnny stayed on task capturing three of the minor plot points and then with disappointingly unclimatic peril cards taking the Pumpkin King himself. 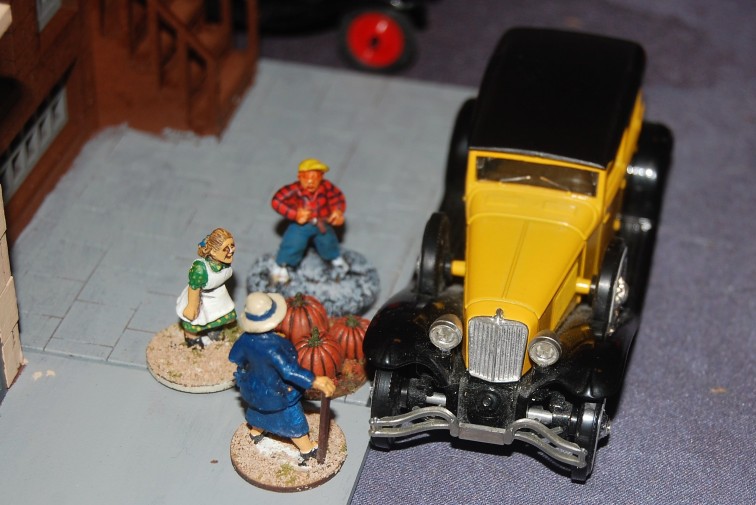 In the end, all three players found the game enjoyable.  I, on the other hand, would change some things if running this again.  I would use a different selection of Leagues.  The Police ended up aiding Johnny Silver in a way that was certainly true to genre, but probably served to unbalance the game.  Two Mobster gangs would have been better I think.  Lastly, I would not leave Pumpkin Jack as the Major Plot Point, but rather have him a Terror.

Anyway, another successful game of this great system!