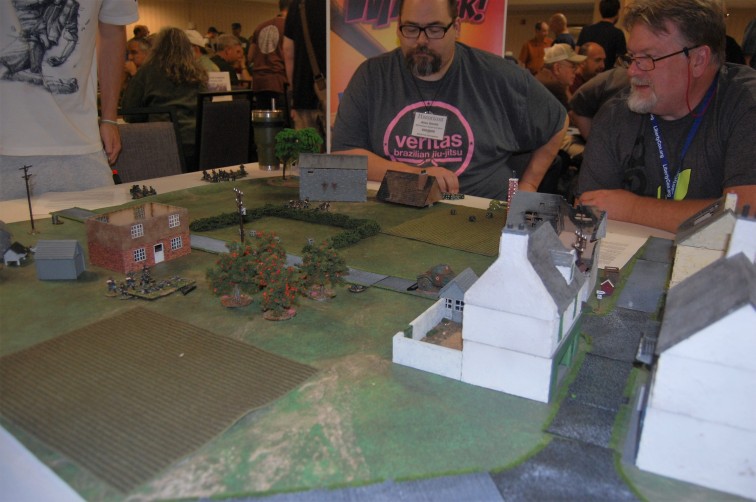 Today brought the end of the 2018 Historicon up in Lancaster, PA.  As Lard America was participating with a Lard day, with guest of honor and Lard Meister Richard Clarke himself attending OI though perhaps I had better go.  Glad I did.

I decided to put on  Hell and Heroism at Hannut by Ben Fiene.  This was a three scenario mini campaign printed in the Too Fat Lardies Christmas Special from 2013.  These are three linked by theme only scenarios depicting some of the action at Hannut.  It also is rather atypical of Chain of Command.

The first scenario Chaos and Confusion, has an interesting beginning set up.  Basically it is May 11th 1940.  A recon platoon of  of 3e DLM is ordered forward to probe the area around the Albert Canal.  Unbeknownst to the French the canal was already seized by the Germans about 24 hours previously.  The platoon’s commander,  Sous Lieutenant de Vasselot dismounts from his Panhard to speak with a Belgian officer.  As he approached he realized the uniform is wrong, this is the enemy!  They both go for their sidearms but the French man is a little faster and the Hun falls.

So begins the battle.  The French have three Panhards and a squad of motorcycles, the third panhard and the motorcycles are detached and will arrive later.  The French , must hold the ground waiting for the missing armored car to return and then they must report back by exiting from the side they entered on.

The Germans  have a Panzer Grenadier platoon but their Commanding officer begins the game dead.   To represent their confusion over this misshap, they not only are limited to one Senior Leader but they also are operating on only 4 command dice.  Their orders are to stop the French from reporting back.

This is clearly a hard task for the Germans as most of their weapons will do little against the Panhards.  Playtesting by Matthew Mattic on Facebook caused him to suggest the addition of a PAK 36 and requiring that the French were at force morale 4 or higher when exiting to win.  This advice was heeded.

Turned out the Anti Tank Gun did little.  The village on the French side of the table provided sufficient cover, blocking the gun’s line of sight.  Shots were exchanged on both sides but casualties were light.

When the missing French detachment arrived this would change.  The Panhards were immune to most of the German fire power, but the poor motorcyclists were not.  Heavy fire was thrown on them, disrupting their cohesion, routing one of the bikes and causing another to dismount.  The French took some hits to their Force Morale, but it was to late.  They got a double phase not far from tables edge and made good their escape.  The French had one, but it was close.

The next scenario was Den Ganzen Lieban  Langen Tag.  A scenario designed around the fighting at Crehen.  The scenario’s name comes from a quote of Panzer Captain Von Jugenfeld who said the fighting continued all the love longed day.

This was a far more typical Chain of Command game with two platoons fighting for possession of Crehen. The French were aided by two Hotchkiss H30s (one with an upgraded long SA 38) two Belgians gates and one minefield. The Germans had a Panzer Grenedier platoon with 6 command dice supported by two panzer IIs, a Panzer III, a pregame barrage and a mine clearing team.

This looked rough for the Germans.  Most of the village is well over on the French side of the table.   There was also a series of walls and stone structures forming a formidable looking barriers across the field.  The French placed the Belgian Gate and the mine fields in the most prominent gaps.  The Germans however were far more aggressive than the French in the patrol phase and managed to get jump of marker very far forward, allowing them to take some of the buildings easier than might have been imagined.

One of these positions was a house just across the road from the petrol station and a fierce firefight began.  The Germans never really committed their rifles to this action, but the MG 34s were doing fine as it was. 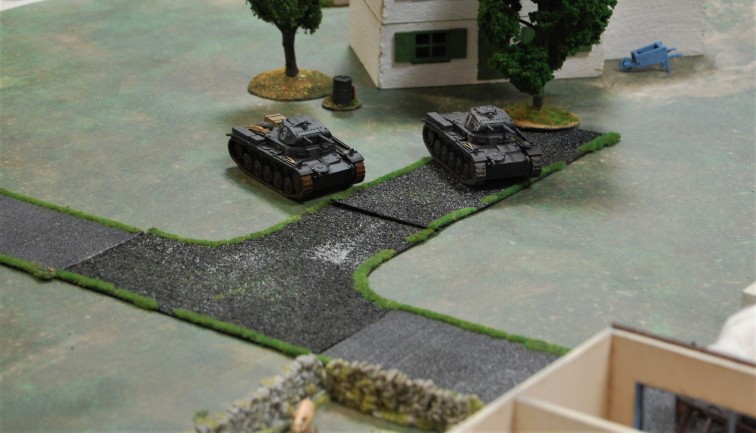 On the German’s left, they sent their two Panzer IIs to rip into the other primary French position, again to very good effect.

The French responded by dividing their Hotchkiss tanks.  sending one forward to support the firefight at the Shell, and the other to deal with the Panzer IIs.  Another squad was also ordered into the Petrol station to support that first squad which had taken heavy casualties this was a huge error.  As the darted across the street, the Germans played their Chain of Command dice and interrupted the action, catching that squad flat footed in the road at close range.  The were ripped apart.  In two phases, the French Force Morale crashed from an already unsteady 5 to 0 and the Germans took the town.

The last  scenario deals with the crazy actions of Lieutenant Le Bel, who on the 13th of May would drive his Hotchkiss through the German lines surrounding Jauche not once, but THREE times.

This scenario is problematic.  The idea sounds  kind of fun, at Le Bell’s story is great.  as written however, the French are only required to drive two Hotchkiss tanks across the board.  Now that might not sound so tough but all the German’s have to stop them is part of a Panzer Grenadier platoon, a Panzer I, a Panzer II and a PAK 36.  The only weapons really likely to do anything to a Hotchkiss is the possibly the PAK 36 and to a lesser degree the Panzer II and the platoons Anti Tank Rifle.  I decided to give them a panzerknacker team as well.  Little damage was done to the French tanks, though there was some success in slowing their progress.

The Panzer I was mostly useless.  Or so I thought.  In the end, with the Hotchkiss tanks a good deal of the way to their objective, the obsolete little German tank raced forward and rammed one of the French vehicles.  I didn’t even know their were rules for this in Chain of Command.  The Panzer suffered more from the crash than did the Hotchkiss, as one might imagine, but in a ram the victor still rolls on the plus 2 net hit chart and the result was an immobilized Tank.  As the victory conditions called for both tanks to make it this gave the German’s the victory!

Every one seemed to have a good time and the majority of my players were in all three games!  Thanks for playing and thanks to Lard America for this little taste of Yankee Lard.

Until next time, Cheers!