This weekend brings another Williamsburg Muster to the Williamsburg, Virgina area and again the world of Lard is being represented by myself (and actually a few others this year).  The conference began today and tonight I provided some people a chance to try Chain of Command Espana.

The players were Brian, Derrick, Ross and Gunnar.  I mentioned above that I was giving them a chance to try, but that wasn’t completely the truth.  Ross had played one of my earlier Espana games, and Gunnar had experience with CoC and in fact is also on the ever popular Lard Yahoo group.

In the past I have tried to represent a particular fight, but this year for my Chain of Command games, I have decided to just use the generation system in the rules.  Originally i intended to let the players actually roll everything up as if they were playing a friendly game at home, but I decided it might be quicker and easier to do all of that beforehand myself.  the fight was to be an attack upon an objective.  I decided that would be a fictional village,  Santa Katarina, somewhere in the Jarama valley.

The table consisted of a shallow valley with very little cover.  just a little scrub, some scattered trees and then of course the town on the left and a small walled olive grove in the middle, along the dirt road that crossed through the area.

Brian and Gunnar commanded a mixed Army of Africa platoon.  Until tonight I haven’t owned enough legionnairios to field a full Legion platoon.  Thanks to Steve at Age of Glory, Now I need to buy more soldatos so I can field a full Moroccan Regulare platoon.  Anyway, the Legionnaires were supported by an adjutant, a bilbao armored car and a 75/28 artillery battery with a forward observer.  The orders were to push the defenders from Santa Katrina and take the village.  They began with an amazing Force Morale of 11!

Derrick and Ross were defending as the Lincoln Battalion of the 15 International Brigade.  They were to hold Santa Katrina and had the aid of an anti tank gun and a Russian made T26B to do so.  Their mortar squads and light machine gun squads also had been supplied with their intended weapons which is not always the case. They also had dug in with three squad sized entrenchments.  They also rolled well for morale and enjoyed a +1 as volunteers, placing their Force Morale at 10.  This would be a long game!

From the very start luck smiled upon the Nationalists as they controlled the first three phases of the battle.  This allowed the to deploy two of their sections. One moved immediately forward to the olive grove and the other up towards the small house on the lower left of the pictures and by the entrenchment.  They also deployed their forward observer who impiously called for a barrage on the church!

When finally able to react, the American’s were forced to defend their jump of points from the aggressive advance of the Fascists.  They defended their right with the AT gun and the left with a light machine gun section, both defending from the entrenchments.  Another section took a positions in the church and its tower.  From these positions the place a withering crossfire onto the exposed 1st section.  Their tank also rumbled up the road and fired on the position of the Legion’s Platoon commander.   The shot was lucky and wounded the Legion’s command, leaving him out of action for the rest of the turn.  This also caused a reduction in the Legion’s Morale.

The Legion’s battery finally landed but it was long and overshot the enemy positions in the church.  A squad of the 1st section bravely ran forth in an attempt to silence the republican AT gun.  Bullets rained down on them as they crossed the open ground and when the hit the position their numbers had already been halved.They assault failed and a squad was lost.  The legion’s morale sank again.

On their right, the Legion was finding more success.  Having moved up and through the Olive Grove, they began to fire at the Light Machine gun squad and were slowly reducing its numbers.  their forward observer also walked the artillery fire forward silencing the supporting squad in the church.  Soon the light machine gun was also silenced, but this time it would prove permanent.

This section eventually was able to advance on the house along the road which was defended by the Lincoln’s Senior leader as well as a squad of brave volunteers.  The Lincoln’s fought bravely and pushed the Legionnaires back killing 8 of their men.  this victory was Pyrrhic however.  Having lost half that number themselves they would not be able to defend if the legionnaires came a second time.  Furthermore their squad leader was seriously wounded.  Now it was their turn to have their morale waver.

Finally deploying their 50mm mortars, the legion began to concentrate on reducing the AT Gun’s position. Shock and casualties from the mortars and the Bilbao that finally joined the fray finally was to much for the brave crewmen, causing them to rout from their positions.  At this point, the republican commander realized that his position was untenable, and he conceded defeat.

The game was long and neither side had been reduced below 5 on their force morale. The forces appeared to be well balanced and it took some time before it was apparent who was winning.I think this battle could easily have gone either way. All players seemed to have a good time and honestly so did the I.  Looking forward to tomorrow.

Also, a special shout out to Empress Minatures.  I received their Spanish Church as a Christmas gift this year and am very pleased with the product.  Think I need to buy more of their Builder’s Yard Range. 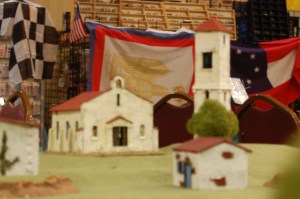 I will be back soon, until then Cheers!

2 thoughts on “Another Jarama Fight”