Earlier this week I received a model I have been wanting for some time to fill out the support list for my 1940 Germans.  A panzer II.  My vehicles for Chain of Command are all 1:56.  I know that their is an argument over what is the better choice for wargaming with 28mm, 1:56 or 1:48.  I am fully aware of  the pros and cons of either.  I actually made my choice for an entirely practical reason.  I am wargaming the Fall of France.  Most of the French vehicles I need are only available in 1:56.

Most of my vehicles are Army Group North, purchased through Lon at Brigade Games.  They do a Pzkpfw IIf, my preference however was for something earlier.  I had the opportunity to look at some of the Blitzkrieg vehicles at the Architects of War booth at Historicon and was pleased with what I saw.  I had to wait however as it was listed as out of stock.  Suddenly it disappeared from their webpage entirely, so I order from my pals at Arcane Scenery.

Arcane scenery is one of my usual sources for British products that I don’t have a U.S. source for.  I am impressed how fast they get things to me here and for what seems like a far more reasonable shipping price then some other companies.  Always a pleasure to do business with!

Earlier I mentioned the controversy regarding proper vehicle scale for 28mm wargaming.  Something I appreciate about Blitzkrieg is that they make many of their models in both sizes, leaving it to the purchaser to decide which to get. 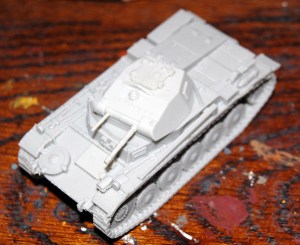 The model itself is a well crafted piece.  Very crisp casting, with far less fiddly bits to have to work out and install or lose.  The model arrived in just a few pieces.  The main chassis and drive train, the turret, driver’s hatch, commander’s hatch, and the two gun barrels. All the pieces are resin.   The separate hatch pieces are a good idea, giving the modeller the option to place visible figures in the piece if the so choose.  Some other companies do this with the commander’s hatch but I am not familiar with the driver option.  I considered doing this and will if I get another one.

The model is also not cast with a base, which is a preference of mine.  I usually do not base vehicles unless I feel I have to correct for a weakness in the model’s structure. 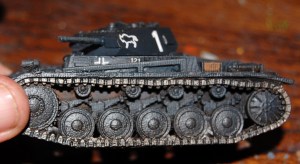 The model took paint very well.  I black primed it, painted it German Grey, added some color to some of the cast on details.  After adding some Company B decals for 7th regiment 10 panzer division i dusted it with pastel chalks and sprayed it with matte varnish.

Here is a picture of the II next to my IIIc from Army Group North, and with a German added for scale.  I don’t remember if the German soldier is a Battle Honor or a Crusader.  I am very pleased with this little tank and look forward to putting it into action. 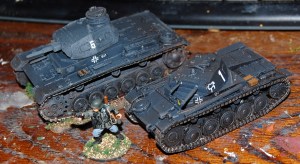